Musk's recent comments on the environmental impact of Bitcoin mining have a curious timing to them.

Recently, Elon Musk rocked the crypto currency market with a tweet stating Tesla would be suspending vehicle purchases using Bitcoin. Musk stated on Twitter, “We are concerned about rapidly increasing use of fossil fuels for Bitcoin mining and transactions, especially coal, which has the worst emissions of any fuel.” 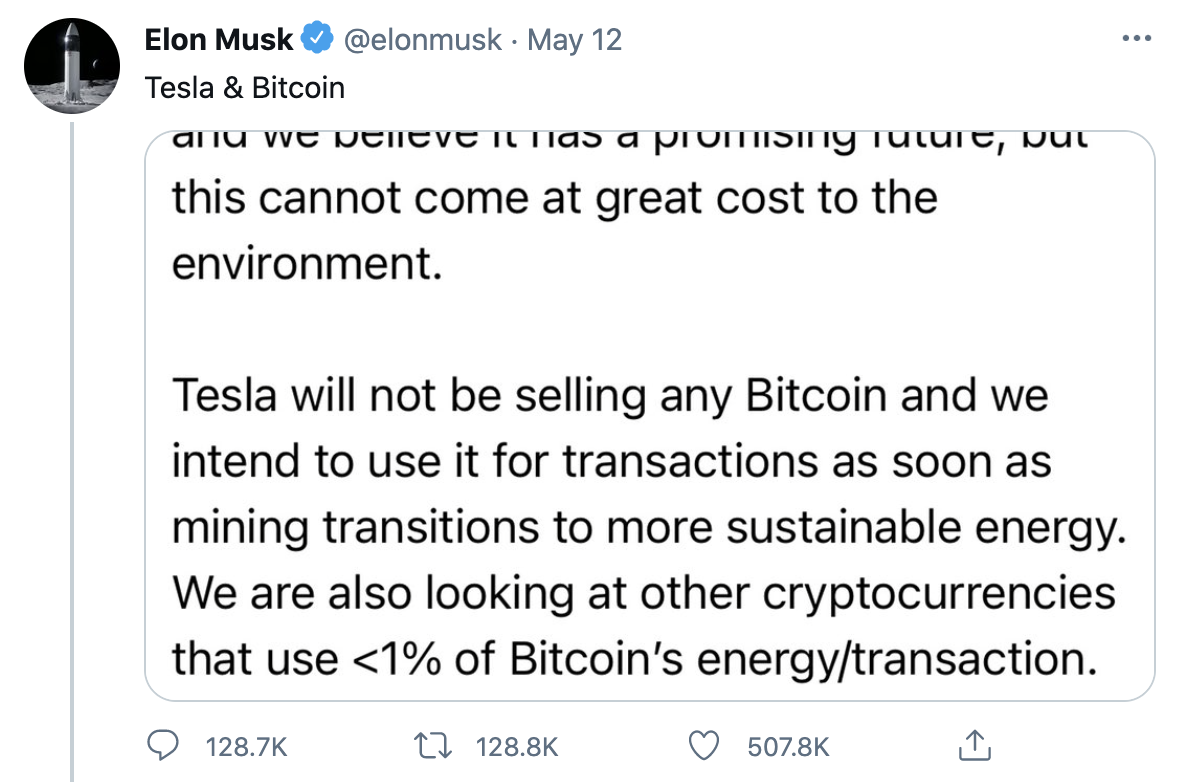 What is noteworthy about Tesla’s sudden change of heart is that a few hours prior to Musk’s tweet, Reuters published an article stating Tesla is seeking entry into the multi-billion-dollar U.S. renewable credit market. According to Reuters, Tesla has a pending application with the Environmental Protection Agency to enter its 18-billion-dollar credit market.

Could there be a potential correlation between Tesla’s updated stance on bitcoin purchases and their attempt to receive the aforementioned regulatory credits?

Mr. Musk had to have been well aware of how Bitcoin mining works prior to Tesla’s decision to buy $1.5B worth of it late last year.

After all, it’s not like the energy consumption of Bitcoin mining was a secret.

Bitcoin mining has been highly criticized way before Mr. Musk’s tweets. Famously, Bitcoin’s energy consumption has been compared to that of the entire country of Argentina in numerous publications.

According to Reuters, if Tesla's application with the EPA is accepted, Tesla would be able to obtain “the most lucrative type of credits, known as D3s, which trade at a significant premium to the larger pool of traditional ethanol credits.”

The correlation between Tesla applying for entry into the multi-billion-dollar U.S. renewable credit market and suddenly suspending vehicle purchases using Bitcoin doesn’t seem like a coincidence to me.

The author of this article holds long positions in both Tesla and Bitcoin.

Agree or disagree with our insight? Share your feedback.

Get the latest reports & insights from Halal Investors. Sign up for our newsletter.

Do good & do well. Learn and contribute to the halal investors community.